Walking Your Way To Better Health

Whether running on a treadmill, cycling on a bike or gliding on your elliptical, you all know you're doing something good. And in this upcoming New Year, taking care of your health can be done one step at a time.

Now, scientists have found that even just ten minutes of mild exercise can immediately alter how certain parts of the brain communicate and coordinate with one another and improve memory function.

We already know that exercise can change our brains and minds. The evidence is extensive and growing. Many of these studies involved moderate or vigorous exercise. Whether a single, brief spurt of very easy exercise will produce desirable changes in the brain has remained unclear.

So for the new study, which was published in September in Proceedings of the National Academy of Sciences, scientists from the University of California, Irvine, and the University of Tsukuba in Japan turned to a group of healthy, young college students.

The scientists invited 36 of the students to the lab and had them move for 10 minutes at about 30 percent of each volunteer’s maximum heart rate.

Immediately after each session, the students completed a computerized memory test during which they would see a brief picture of, for instance, a tree, followed by a variety of other images and then a new image of either the same tree or a similar one.

The students would press buttons to show whether they thought each image was new or the same as an earlier shot.

The test is difficult, since many of the images closely resemble one another. It requires rapid, deft shuffling through recent memories to decide whether a picture is new or known.

Next, the scientists had each student repeat this sequence — exercising for 10 minutes and then completing memory testing — but the testing now took place inside an M.R.I. machine that scanned the young people’s brains while they responded to the images.

Then the researchers compared results.

The effects of the exercise, undemanding as it was, were clear. The young people were better at remembering images after they had exercised, especially when the images most closely resembled one another.

In other words, the harder their memories had to strain, the better they performed after the exercise.

More unexpected, their brains also worked differently after they had exercised. The M.R.I. scans showed that portions of each student’s hippocampus lit up in synchronized fashion with parts of the brain associated with learning, indicating that these physically separate parts of the brain were better connected now than when the students had not first exercised.

The findings show that exercise can change people’s brains and minds right away without requiring weeks of working out. It looks like people can improve their memories with a short walk.

How will walking make me healthier?

Walking has health benefits beyond what you may think. According to the Cleveland Clinic walking:

How far should I walk each day?

According to the American College of Sports Medicine (ACSM) a good goal is to take at least 10,000 steps a day, which can be measured by a 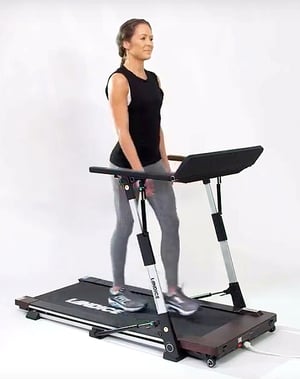 pedometer or other fitness equipment like a treadmill. The Landice M1 Folding Treadmill has step measuring function.

How do I keep myself motivated to walk?

What cautions should I take with a walking program?

Elliptical vs. Treadmill: What Are the Workout and Health Differences?