Depression and anxiety are real issues that are debilitating and dangerous to our mental health. In any one year, about 10 percent of the U.S. population would meet the diagnostic criteria for depression, and about 20 percent for anxiety. Of course, everybody gets sad and worried at times. So, what distinguishes those feelings from clinical depression and anxiety?

Only 2 days left FOR THE Landice E7 Elliptical Sale

As runners we know the meditative and restorative powers of running. Studies show that aerobic exercise can be as effective as anti-depressants in treating mild to moderate depression (and with side effects like improved health and weight management rather than bloating and sexual dysfunction).

How Does Running Help with depression?

How does moving the body change the mind? A growing body of work—both in the lab and with patients—shows that there’s more to it than endorphins, the well-known opioid the body produces during certain activities, including exercise.

But endorphins aren’t everything. Significant studies  have been done on endocannabinoid levels in runners, dogs, and ferrets. Endocannabinoids are substances that bind to the same receptors in the brain as THC, the primary substance responsible for a marijuana high. And, maybe something that gets us to our runner's high. 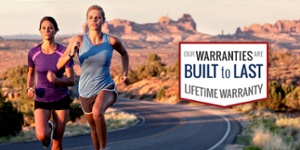 A short-term mood boost thanks to endorphins and endocannibinoids is one thing. But where running really helps with mental health is over time, thanks to a change in brain structure. A review of research published in Clinical Psychology Review concluded “exercise training recruits a process which confers enduring resilience to stress.” This appears to occur because regular running produces the same two changes that are thought to be responsible for the effectiveness of anti-depressants: increased levels of the neurotransmitters serotonin and norepinephrine, and neurogenesis, or the creation of new neurons.

A hallmark of depression is self-defeating, absolutist thinking—“everything is harder than it should be,” “there’s no pleasure in my life,” “it’s always going to be like this.” But running can help us banish those thoughts. Regular running can convince yourself that progress is possible regarding the many worries in our lives that lead to depression and anxiety. The experience of seeing yourself do something can make you feel better. If you take anti-depressants and they make you feel better, you come to rely on the drug for that better feeling. If you exercise and feel better, you know it's occurring because you're putting in the work to make it happen. That's very empowering and makes you realize you can take control of the situation.

It’s nice to run for an hour and go from being in a good-enough mood to a better one. It’s a fundamental shift to go from being miserable to content, thanks to an infusion of feel-good substances. And running may be the only exercise that really provides the rush. Have you ever tried swimming or cycling and found that you get that some "high" after the workout.

While depression and anxiety can be a year-round feeling, as we now enter the colder, darker days of the year we may all begin to feel a little more sluggish, sad and less hopeful. Just know, that lacing up those shoes and jumping on your treadmill or going out for that brisk run can be the best medicine out there - and one that is good to be addicted to.

Many of the points in this article come from Scott Douglas and his book Running is My Therapy, which can be found on amazon.com

How To Make The Most Out Of A Treadmill

Does Running on a Treadmill Affect Your Running Gait?